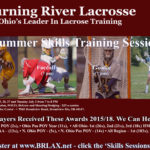 Anyone can make claims, below is a list of awards our players have earned over the past 4 years