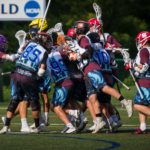 Background: For the last 15 years Burning River Lacrosse has been the cornerstone of lacrosse development in Northeast Ohio. In 2005, Burning River started with just three coaches and eleven players. We began re-establishing how the nation viewed the level or skill of lacrosse in Cleveland. 15 years later, we have served 1,000s of area players and have established a proven track record of success at both the regional and national level.

In the past, we have only provided 1 team (our Maroon team) at each graduation year for area players. This team focused on players that are at the Division I, Top 10 Division II and Top 15 Division III caliber level. They competed at the top national recruiting tournaments against the top club teams in the nation. They also attended the top individual showcase offerings to further highlight their abilities.

Because of our team’s success, hundreds of area players have had the opportunity to play in college with 7 winning NCAA championship and 2 winning MLL championships.

Several years ago area players and parents asked for more players to have access to our coaches and travel practices. We responded with our Flex team which allowed 8-12 players at each grade level to practice with our travel team in the offseason and in the summer. This allowed these players to benefit from our superior coaching, unique practice structure and exclusive BR Way format. Our flex team has been a huge success and dramatically increases the number of players benefiting from access to our coaches.

Now area players and parents are asking for more than just the ability to practice with us. They want to take advantage of our superior coaching and unequalled administrative and logistics support to compete against other clubs.

The Solution: To address this issue and expand on our commitment to provide area players with the best lacrosse development options and college recruiting opportunities we are adding a second team (NAVY) at the high school, middle school and youth level. This will allow more players to have access to our player development programs and unequalled administrative / logistics support to aid in their development and achieving their goals.

Burning River Maroon: Our MAROON team will be focused on players that are Division I, Top 10 Division II and Top 15 Division III caliber talent. They will continue our tradition of successfully competing at 3 or 4 of the top national recruiting tournaments such as Inside Lacrosse, Baltimore Summer Kick Off, and Sweetlax Invitational. These players will also attend the nation’s top individual showcases including but not limited to Main Stage, Adrenaline Black Card, Maverik Showtime, NXT Philly and NXT Baltimore Showcases.

Burning River Navy: Our NAVY team will be focused on players that are Division II and Division III caliber talent. In the past these players would have been on our FLEX team practicing with us. These players received the same coaching and practice opportunities as our Maroon players, however our flex team families made it clear they needed game play which why we are adding the Navy team option to the Burning River offerings.

At the high school level, the Navy team will compete at two national and/or regional tournaments that are the focus of D2 and D3 coaches and their staffs. These players will also attend 1 or 2 individual showcase s run exclusive for D2 and D3 college programs in the summer (e.g New England 150, The D3 Showcase, STX Rising DIII Summer Showcase, National D2 showcase, etc.)

At the middle school and youth level they will attend the same tournaments as our Maroon team, compete in the appropriate brackets (e.g. Maroon team in the 14U Gold bracket, the Navy team in the 14U Silver bracket). Potential tournaments include: Pipe City, King of Queens, NXT’s The Grail, Summer Brawl, and Luck of the Draw.

Movement between team – Every year we have seen numerous players earn their way from the flex team onto the Maroon tournament team and attend our summer tournaments. We expect the same will be true from Navy to Maroon. Based on players skill & athletic development over the course of the year spots can be earned to play at these National Level events.

In the other direction, there are times where a Maroon player is struggling to get seen by the college coaches. This can happen when there are 2 or 3 Division 1 players ahead of him at his position. In those cases, that player will have an opportunity to play with the Navy team to be a top-level player at your position and be a leader for your teammates. This isn’t a demotion, but rather an opportunity to be put in a situation where you can thrive, be successful, and grab the attention of college coaches

Coaches: The Navy team will have access to and be coached by the same coaches as our Maroon teams. Our coaches are some of the area’s top college coaches, high school coaches, college players (BR Alumni) and high school players (BR players). Our coaches are focused on the goal of improving our player’s individual / fundamental stick skills, positional skill set (Attack, Midfield, Defense and Goaltending), and understanding of team concepts (Transition and Set Piece Offense and Defense) play. They do this by spending the vast majority of our coaching time teaching techniques and fundamentals in individual or small group sessions.